The Fortunes of Magic

Liam moved with his parents to a planet that had yet to become a full-fledged member of the empire; in fact, it was so new that it had yet to earn a name, still being classified as Planet 663-457. They came to study the people and their society, and judge their readiness to enter the empire.

The people of Planet 663-457 were happily lodged between the Iron Age and the Machine Age.  The only, and by far biggest, difference between these people and the people of Earth was the fact that they were about four times the mass of the normal Earth human.  This, however, didn’t stop twelve-year-old Liam from making fast friends with three local boys and they were soon inseparable.

There was one aspect about the planet and its people that Liam’s parents didn’t find out about until their son was irretrievably submerged in it - magic.  Many people of Planet 663-457 had some modicum of magic, but few were strong enough to be able to access it.  Those that were strong enough were brought to the masters for testing, and if they passed the test, the masters took on their training.

Join Liam as he tries to lead a normal life while those around him try to control or regulate the magic that is as much a part of him as the very air he breathes. 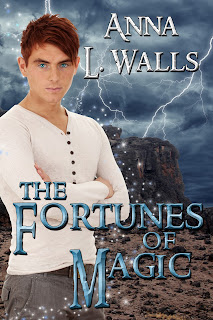 I look forward to reading. Congratulations to you! Granny Gee/Gloria :)))

Today is a date to remember. I just submitted this book to CreateSpace for publication. Only days away at the most from being a real book.

On January 11, 2013, a few days after publishing this book, I discovered a site called Authorgraph. Look it up, it's really kind of cool. It allows readers to get their kindles signed - I've done it once. The best part is I get an email about once a week that tells me how my books are doing on Amazon, or at least the kindle edition anyway. I got my first such email on the 18th and this book ranked at 544,014, having lost 12,354 from a previous reading. By my latest email, this book ranked at 1,186,081, having lost 6,881 from a previous reading. That ranking number means that's how many books have sold better than this book. However, it would be incredibly hard to know if the discrepancy is more a drop off in sales as opposed to an increase in books. Three years is a long time in the self publishing world, and I know it has expanded by leaps and bounds. You might even say it has exploded.

This blog is copyrighted

Stumble it for me, will you

Magic, Spaceships and Romance - With a Little Trouble Mixed In

Promote Your Page Too

Welcome to THE FORTUNES OF MAGIC

The Fortunes of Magic is a blog novel I've decided to share with you purely because I love my fans and I love to share. This story is now available on Amazon.

If you would like to know a little more about some of the stories I've written, there are some synopses on my website - http://AnnaLWalls.weebly.com - Come on over and learn about my Passion. Please feel free to ask about those stories that don't happen to be there.

My Obsession is all things writing. I've written two dozen books ranging in length from 6 pages to over 1100 pages. I'll post a different sample each week as the mood pulls me. Kinda depends on which character wants to show off at the time. But keep an eye pealed - once in a while there's something else entirely.